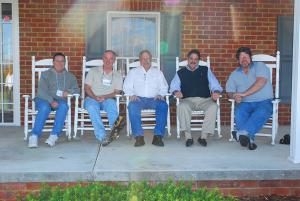 Bob Boles called me a while ago and asked if I would write a little something about why one should come back to Lewisburg for a reunion. This October is the class of 1969’s 45th anniversary of our graduation from GMS. My original intent was to compare leaving GMS after 3 years to my retirement this past May from Minnesota State University Moorhead (MSUM), where I taught for 28 years.

But it is really impossible to compare the two, GMS and MSUM. Though I have successfully enjoyed my time here, it pales against the 3 years spent in Lewisburg. I have made strong connections with MSUM and Fargo-Moorhead over these years, but none will hold the bonds made 45 years ago with you guys, the school and community. So why go back to this 45th reunion?

In 2008 Angelo Damante and I had a brief email exchange after Dave Ritchie received the GMS Hall of Fame Award. Angelo made a telephone appearance during Captain Ritchie’s presentation and I wanted to let him know how much it meant to everyone in the audience.

I wrote, “Angelo, you hit it spot on in addressing what all those men had done for us during our stay in Lewisburg, even those moments when we couldn't stand being there. Just think of the enormous responsibility they assumed while being our teachers, our leaders and our guides through those years! Responsibility we, as cadets, were too young and immature to recognize.”

Angelo wrote back: “The years go by so fast, and we tend to forget so much, due to the fact that we are tending to our daily existence…”

He spoke of the faculty members at GMS and of what … “many of us went through, but maybe didn’t appreciate at the time. ... I really attribute any success that I have had in this life to the years at the Brier. They truly made me who I am…” I feel sincerely lucky that I (and my son Greg who resides in DC) were in the audience that day to hear Angelo’s call and watch Dave Ritchie receive his award.

To mirror Angelo: What we did there at GMS molded us into who we are today and in many ways our success.

About 8 years after our graduation in 1969, I made it back to Lewisburg while on a ski trip to Snowshoe. After that I attended another reunion probably around 1994. And I think that was it … until 2008. Since then, I have been back at every reunion that I could attend. I have rekindled friendships and I have made new ones. I have connected with faculty members who actually remembered me, and some that look at me in puzzlement. Maybe they were looking at me with the same look that long time ago.

So, why this attachment after 45 years?

Though closed in 1972, GMS lives on physically in the front yard and the main structure of the West Virginia School of Osteopathic Medicine. A drive past the mess hall and D stoop will bring back a host of memories. And while the dorms and auditorium are not so recognizable, one stroll down the main or the upper hallways or through the Tower will bring a on a flood of recollections.

If you still have your yearbook, take some time and flip through it. There is a heading on page 5 of the 1969 “Brier Patch” that reads, “It is a Spirit That Frees Us and Enables Us To Believe in the Future, To Live with Zest—The Free Spirit”. Truly this is a statement describing our generation. The Free Spirit: free to learn, to accomplish, to compete, to get together, and to make friends. That is who we were then and are now.

So, where are all those guys in that yearbook we had so much in common with? We were and are in such a small club, that it is a shame we have not stayed in closer contact. Where are you Raymundo Rodriguez, Ed Dillabaugh, Pete Zuhars, Roy Taylor, Ralph Gallo, Lacinio Pichardo and Quentin Bullock?

Think about the bonding we went through. What our daily regiment meant to us: reveille, retreat and taps that ruled our day; eating breakfast, lunch and dinner with 300 of your closest friends; daily bathroom routines that other’s not in our boots would ever understand. Think of the close camaraderie amongst all of us no matter what our age, social strata or school rank. One would never see that outside the walls of an institution such as ours. Remember the Final Dress Parade and Silent Drill?

When I think of GMS, I think mainly of good friends and good times we had together. GMS football with fall colors and smells that will never be matched anywhere else; cold walks to the basketball games and snows that coated our campus in a winter splendor. The rebirth of the hills each spring is something I miss even today and will always cherish. Yet, we all experienced some tough times and major homesickness, being away from home, family and friends, maybe away from your girl. But we made it through.

October will quickly be upon us. So come back to Lewisburg this fall October 16-19 and maybe find out what happened to your roommates and friends, see what GMS has evolved into, chat with some of the faculty members and coaches. Come and share some good food and stories. And OH YES, those stories get longer, bigger and better every year!

Well said Mike! Thanks for

Permalink Submitted by Matt Winans on Mon, 06/16/2014 - 22:10
Well said Mike! Thanks for all you have done in my life and for the GMSAA. Fargo won't be the same without you, but hopefully we will meet again.

Permalink Submitted by Jorge Ribeiro on Thu, 09/18/2014 - 12:58
Angelo was company commander of E Company, the little kids, my first year at GMS and my brother and I have never forgotten him though we didn't know him well. He was an impressive captain. So we finally made it to a reunion two years and we had a fantastic time. I can close my eyes -- and do it often -- and see the school building, the hallways, and the city of Lewisburg. I miss it and want to get back more often. The reunions are amazing! And I'll try to get to another one soon.